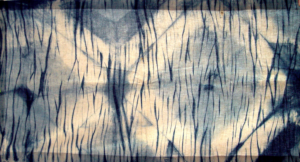 Indians were well versed with indigo, the most eco-friendly, fast and rich blue dye from Indus Valley Civilisation. Indigo is a complex blue dye which is extracted from various plants. But the Indian indigo of Commerce was mainly extracted from the plants belonging to genus Indigofera. Indigo and Indigo dyed textiles were exported from India to Egypt and Persia and China in the East from the ancient times. Various types of colours having specific names were developed using natural indigo in India.

This talk covers the ancient history of Indian Indigo of Commerce, various names of indigo and their meanings, and ancient indigo dyed textiles excavated from various parts of the world starting from Christian Era till now. 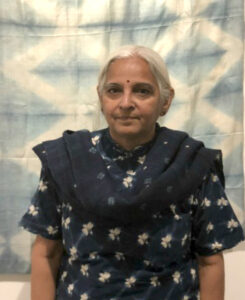 Padmini Balaram shows some of her work in indigo dyes on textiles, both using traditional techniques and her own experiments. Padmini’s acquaintance with natural dyes and indigo took place when she carried out her field research for Dr. Lotika Varadarajan’s book South Indian Tradition of Kalamkari in 1976. At that time she realised that the use of natural indigo had stopped at all the kalamkari centres.

She researched on the use of natural dyes and the dyed textiles and accessories among 16 different tribes of Northeast India in 1984, for DC Handicrafts, in Al Dyeing in Koraput and Bastar in India in 1985, and later in 1997 for Madhya Pradesh Hastashilpa evam Haath Kargha Nigam. She was appointed as consultant to develop methods of Dyeing using Natural Dyes by Ministry of Textiles, M.P. Silk Board and UNDP. She received Japan Foundation Fellowship thrice from 1995 to 2019, from Asia Scholarship Foundation in 2003, and Fulbright in 2013. She has researched on Indigo in Japan, Thailand, Laos, Uzbekistan, China, Korea, and India. She has taught and given lectures on Design and Natural Dyes in various esteemed universities, museums, societies; in India and abroad.