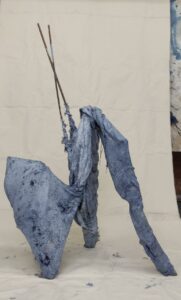 The second pandemic summer was an isolated one for me, even more so than the first one. It was also a time of great restlessness and churning. It just so happened that as I began working on some unfinished works in my studio, this restless churning slowly found a rhythm and the following three months became the most prolific in my 10 years of practice as a sculptor. Like everything that happened over the summer, Indigo too was an encounter beyond my control, It happened and I enjoyed the working with this colour so much - the deep stains that it left, the difficulty in removing them - that I soaked myself in it for over three months. Everything in my studio, in that period, was touched by Indigo in some way or the other. The street dogs around my studio too, spotted Indigo hues! Looking back, I cannot think of another colour I would feel comfortable being surrounded with, maybe green. Could this comfort with Indigo be because of how we perceive the sky and water in a similar colour or hue or shade? 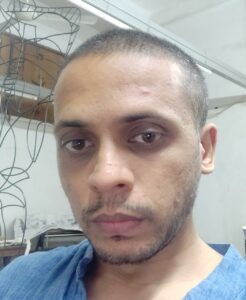 Vyom studied sculpture at Baroda and has had a studio practice in Ahmedabad for 10 years. His work has moved from creating experiential installations, monumental sculptures and in material exploration or play. While retaining the concern of the human presence and how it is manifests itself in expanding cities to changing aesthetics, from positions on love and development to examining the human condition; positions on humanism itself. For his last solo exhibition, using metal, terracotta, cement, lime, papier-mâché and in countless drawings Vyom evoked a diverse world of non- human presences. This othering has led to further abstraction in his work, where-in there is a greater attempt at moving away from a formal association with the other, the non- human, the creature; both deepening the exploration of posthuman possibilities.